In today’s gospel, we hear that Jesus again appeared to His apostles, reinforcing the reality of His overcoming death, while making it clear to Peter of what would be expected of him after Jesus left this world. Of course, the apostles would not come to terms completely with their role in spreading the good news of salvation, until the coming of the Holy Spirit in tongues of fire. 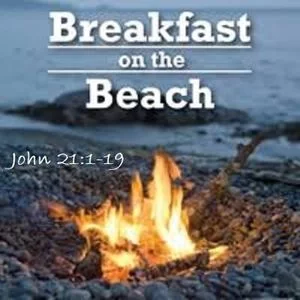 Meanwhile, some of the apostles, with Peter taking the lead, decided to go fishing. It was night time, and their catch was lacking, so back to shore they went, to be greeted by none other than the resurrected Jesus. The Lord asked the apostles if they had caught anything, and of course they replied “no”, and Jesus instructed them to cast their net over the right side of the boat and try again. Not yet recognizing Jesus, the apostles gave it another try, and we know what happened, as their net was full to breaking, and that’s when John knew it was the Lord speaking to them.

Without much thinking, rambunctious Peter tucked in his garment and jumped in the water to see Jesus, while the others brought the boat with the big catch to shore. Jesus had a charcoal fire prepared with fish and bread ready to eat, saying “Come have breakfast”. After the breaking of the bread, Jesus began to remind Peter of his past denials, while making it clear He expected Peter to do. Three times, Jesus asked Peter if he loved Him, and three times Peter proclaiming his love for the Lord. Each time, Jesus responded, saying “feed my lambs” and “feed my sheep”.

Thus, Jesus was foretelling a time when the apostles would bring thousands from distant places to know the good news of salvation from death and destruction through the cross and resurrection of Jesus. The “catch” of souls would be so vast, yet the early church of Jesus Christ was strong enough to prevail despite persecution and strife.

As Catholics, each time we attend Mass and receive the Eucharist, Jesus is saying to each of us, “come and partake in the feast”, where we recall the breaking of the bread at the Last Supper, and receive the real presence of Jesus, body, blood, soul, and divinity. This spiritual nourishment will help sustain us in our walk with Christ, knowing that we too are being called to be fishers of men and women!

Have a Blessed Sunday!

This Easter Sunday – A Call to Action