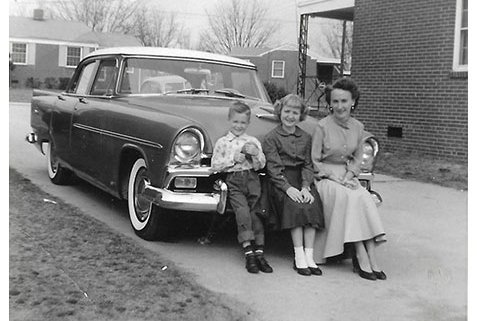 When we consider all the influencers in our lives, mothers unquestionably play a dominant role. My mom, Audrey, was no exception. Her life, cut short by cancer at age 56, was so impactful, particularly to my brother, two sisters, and me.

Audrey Murray was born in the mountains of Pennsylvania. Her family struggled during the depression years, yet they kept it all together. That experience influenced Audrey, who persisted in being thrifty decades later, even when Dad was doing quite well financially as a sales manager with Met Life.

Audrey’s Catholic faith was vital to her life, as she regularly attended Mass at St. Peter and Paul Catholic Church in Tower City, PA. After marrying Dad, Cliff Herzberg, Audrey left Pennsylvania, and lived the life of a military wife, transferring with Cliff to Camp Gordon, along with my sister Audrey and me, in 1953.

Mom and Dad connected quickly to the Catholic community in Fleming Heights in south Augusta, which years later became a neighborhood foundation for the Alleluia Community. The center of my parent’s faith, and ours, was embodied then in St. Joseph’s Catholic Church, located on Lumpkin Road not far from our home. Mom, with Dad’s support, made sure we never missed Sunday Mass, and she brought us without fail, to stand in line at the back of the church awaiting our bi-weekly Confession. Catholic school was essential, and we were taken in our rickety church bus to Sacred Heart School in downtown Augusta.

Becoming an altar boy was also expected, and later with Mom’s strong encouragement, I left home in the mid-1960’s to attend a Catholic seminary in Savannah, along with lots of my altar boy friends and Sacred Heart classmates.

Catholics didn’t tend to quote much Scripture in those years, although Mom had one that she emphasized, which was seek first the kingdom of God, and all His righteousness. (Matthew 6:33). I think she left out the part about all else would be provided. Mom just wanted us to keep our focus on God, without any expectations.

Mom had a penchant for writing, and I have several typed letters she sent me during my seminary years to prove it. Sometimes I wonder if Mom’s faith yearnings have somehow found expression in my own writings. For sure, Mom has been my greatest influencer in my faith journey, and I believe she smiled in heaven when I took my temporary profession as a Lay Carmelite. Mom would have liked that, and maybe she would have joined me in this way of life.

Thanks Mom! Your love and encouragement meant the world the us. She probably wouldn’t like me bringing up her age, but in 2020, it will be 100 years since Mom was born, and Dad too!

Learning to Be Content with God’s Blessings
Scroll to top