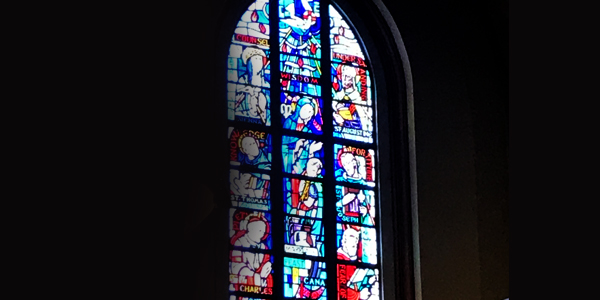 “Don’t be afraid of those who want to kill your body; they cannot touch your soul.  Fear only God, who can destroy both soul and body in hell (Matthew 10:28).

We end this series on the gifts of the Holy Spirit, as depicted in stained glass behind the main altar at St. Mary of the Hill Catholic Church in Augusta, with a few thoughts on “Fear of the Lord”.  One might think that fear drives Christians to take their game up a notch to avoid negative consequences in the hereafter. This goes back to my own upbringing, where sin had consequences and unconfessed serious sin could land you in hellfire.  More contemporary thinking often takes hell out of the equation, deemphasizing eternal consequences and promoting God’s infinite love and mercy, which offers a heart seeking God a more pleasant landing in eternity.  After all, they might say, “he meant to do the right thing”.  Good intentions seem to matter.  I thought “the road to hell is paved with good intentions” was the real story.

In stained glass, Moses is shown holding the Ten Commandments, with “Fear of the Lord” ascribed to him. Fear of God was often lacking among the Israelites whom Moses freed from slavery.  Moses was a reluctant leader and fugitive with a rap sheet for murder in Egypt, whom God compelled into duty anyway to take on the Pharaoh and receive the commandments.  It took supernatural grace to move Moses to action, and at some level he developed a respect for God, which gave him the backbone to stay to course during the miserable period of desert exile, where the hardheaded Israelites struggled with their doubts and fears, with Moses being the arbiter between God and his flock.  The Ten Commandments laid down the law, promising a better life and closeness to God for the person who embraced these precepts.

If God can work with a known murderer to lead His people, he can certainly work with any of us to further the purposes of His kingdom, even helping bring a few reluctant souls along to know the love of Jesus.  The appropriate measure of fear is just enough where we desire to pursue a closer walk with Christ, developing a rightmindedness that tends to seek virtue and reject vice.  Fear becomes a possible sense of loss of this alignment with God’s will, forfeiting a life of greater peace and joy and being tossed back into the mindless and unfulfilling pursuits of this world.

Fear is a healthy thing, to keep us on the straight and narrow path set forth by the commandments, freeing us from a dread of rejecting God’s love when we go it on our one.  The good news is that “nothing can separate us from the love of God, that is revealed in Christ Jesus” (Romans 8: 31-39).

So, if were hanging out beyond the fringes of holiness, wallowing in our sinful ways, there is time today, to find forgiveness, mercy, and a fresh start, conquering fear and finding a greater sense of wellbeing in Christ.

The Seven Gifts Depicted In Stained Glass at St. Mary on the Hill Church: Part... Don’t Give in to Doubts and Fears
Scroll to top