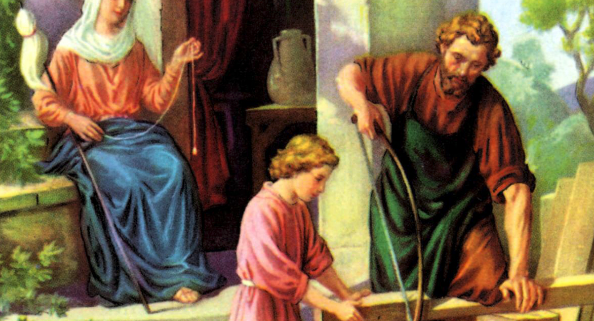 The gift of fortitude is depicted in stained glass at St. Mary’s Church and attributed to St. Joseph, spouse of the Blessed Virgin Mary. While much is written about Our Lady and the birth of Jesus, little is recorded about Joseph. We know that the news of Mary’s pregnancy pushed Joseph to quietly divorce her, although God had other plans. Joseph was redirected by an angel of the Lord in a dream, who said “do not be afraid to take Mary home as your wife, because what is conceived in her is from the Holy Spirit” (Matthew 1:20).

Joseph’s response was not recorded in the gospels, although it’s clear that Joseph got with the plan, and was faithful to his family. Joseph overcame his fears and doubts and was steadfast in his role as spouse and earthly father of Jesus. Joseph displayed the gift of fortitude, showing courage and selflessness, with little recognition. Joseph would be referenced in Scripture when Jesus was in active ministry, and citizens of Nazareth were in disbelief that their native son would display such wisdom and miraculous powers. Their frame of reference was Joseph, asking “isn’t this (Jesus) the carpenter’s son?” (Matthew 13:55) They measured Jesus’ potential on his relationship to Joseph as a “mere” carpenter. Joseph stayed the course, and tradition has Joseph dying before Jesus realized the fulfillment of His calling as the Son of God, and Son of Man.

In my own parenting experience, when it came to numbers of children, I followed a path less travelled. Some of our friends and family were less than impressed, questioning our good judgment in having eight kids. One of my early managers all but accused me of being negligent, knowing our income was relatively low at the time, and how could we be so stupid to have a large family, he might ask, where we could ill afford college tuition costs, and so forth.

Stephanie and I stayed the course, somehow working through many child-rearing years. Yes, we experienced a few bumps along the way, although all turned out just fine. Looking back, I’d hardly say we were courageous or showed fortitude. Perhaps stubborn and determined might be a better description. We followed our path, as it unfolded, prayerfully and faithfully, with blessings flowing as more children came along. We were steadfast and more than stuck it out, now enjoying the blessings of 12 grandchildren, which made the parenting journey all worthwhile.

St. Joseph was steadfast, doing what God called him to, with little fanfare. His fortitude found meaning in the commitment he made to his special family, dealing with fears and uncertainties, yet staying to course. The silent witness of St. Joseph has served through the ages as a solid example and testament to trusting and being faithful to the will of God, day by day.