Watching the Presidential debates last week, where candidates in a crowded field sought ways to stand out, offering solutions to improve access to healthcare, higher paying jobs, and enhancing our standing abroad, you couldn’t help but notice a predictable level of superficiality to the multitude of proposals offered. If we could just raise more taxes, they would opine, so many of our national problems, from immigration to healthcare and so-called income inequality could be rectified. Of course, the voting public wants solutions, but good counsel with truly actionable plans are in short supply.

For years, my chosen career field of Human Resources management has involved advising CEO’s and other healthcare leaders on resolving workplace conflicts. I have been told that I have a knack for quickly sizing up organizational dynamics through observation, and then accurately pointing out opportunities and vulnerabilities. When evaluating talent in selection processes, I might be the only one to see beyond interview responses and assessment scores to identify future potential or weakness among job candidates. Call it instinct, intuition, or just dumb luck at times, getting it right in the counsel I provided leaders has been essential to my career success and sustainability. 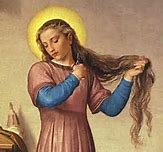 Image of a young St. Catherine of Siena cutting her hair in defiance of her parent’s wishes that she improve her appearance so she could attract a husband.

St. Catherine of Siena, who is shown with the word “Counsel” in the stained-glass image at St. Mary’s, was born in Siena, Italy in 1347. Catherine was a mystic, having visions of Christ beginning at an early age. She is described as a determined sort of person, resisting her parents’ efforts to have her take a husband by cutting her hair to make herself less attractive. She gave her life completely to Jesus, experiencing His presence in unusual ways. Catherine spoke of a mystical marriage with Jesus, seeking to share in His sufferings, and it was reported that she experienced the stigmata, which is bearing the same wounds to the hands and feet as Jesus did at Calvary.

Catherine was not well educated, yet she wrote her Dialogue, a book on her mysticism and spirituality. She might be described as a somewhat “weird” because of her unusual experiences and devotions. That said, her witness and love of God was admired and credible among church leaders, which was made manifest in Catherine being permitted to approach Pope Gregory XI in 1376, to help convince him to move the papacy from exile in Avignon, France, back to Rome. Catherine wrote letters and stubbornly pushed Gregory to make the change, which returned the church to greater prominence and away from the influences of the French monarchy. Catherine died in 1380, and in recognition of her unique expressions of love of Jesus and His church, and I expect her wise counsel, Catherine of Siena was canonized as a saint in 1461 and was declared a doctor of the church in 1970.

The Seven Gifts Depicted in Stained Glass at St. Mary on the Hill Church: Part...