“If anyone wants to be a follower of mine, let him renounce himself and take up his cross every day and follow me. For anyone who wants to save his life will lose it; but anyone who loses his life for my sake, that man will save it.” (See Luke 9: 18-24)

I was saddened this week to hear that the Fr. Jonathan Morris, former Program Director with the Catholic Channel and a Fox News contributor, had announced that he was leaving the priesthood. When I used to make weekly commutes from Augusta to Atlanta, I listened to Fr. Morris on the radio, and was impressed with his devotion to his faith and vocation. In his recent announcement, Fr. Jonathan explained that he was doing what he believed was God’s will, having struggled for many years with his calling to the priesthood. We can ponder on the wisdom of his decision, yet Jonathan acted on his understanding of God’s will and purpose for his life.

It seems that each of us spend years, if not a lifetime, discerning God’s direction, making changes along the way. We read in Scripture about the conversion of Saul of Taurus, where Jesus changed his trajectory in dramatic fashion on the road to Damascus. For most of us, God reveals himself gradually and without fanfare. How we respond to these urgings of the spirit is not a trivial matter, and when we stubbornly go our own way, we can be distracted and left less fulfilled as a believer. 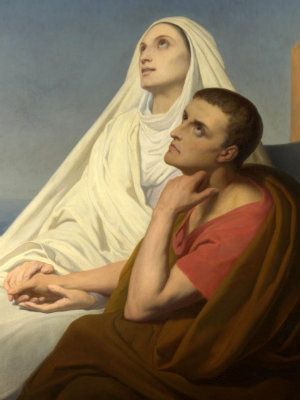 The life of St. Augustine of Hippo is a good example of how God’s chosen can get off track, yet through the stubborn urgings of the Holy Spirit and, of course, grace, eventually find their way to realize the fruits of God’s true calling.

Augustine was born in northern Africa in the year 354 AD to a Christian mother, Monica, and a Pagan father, Patricius. Much has been written about Monica as the determined mother who was steadfast (and successful) in praying for her son’s conversion. For all his accomplishments later in life, Augustine spent many years relishing a hedonistic lifestyle, which included keeping a mistress for many years, with whom he had a son. Of course, God had a plan for Augustine, whose potential as a scholar was made manifest over time, and through the influences of Ambrose of Milan, a great orator and Bishop, and others, Augustine was drawn to the truth embodied in Scripture. He found, like so many of us, that our restless spirits are not calmed by the endless pursuit of pleasure, but only by seeking the love of God.

Augustine converted to Christianity, became a priest and later the Bishop of Hippo, and spent the remainder of his life defending his Christian faith, and seeking souls for God’s kingdom. His writings are amazing, particularly Confessions, an autobiography chronicling his life before and after giving his life to Christ. Centuries after his death in 430, Augustine would be canonized a saint and proclaimed a Doctor of the Church, quite an accomplishment considering his strong proclivities and likely addictions to sinful behaviors.

Perhaps we too have grown in our faith, understanding the futility of living a life of self-gratification, and knowing that only the love of God will satiate our need for meaning, purpose, and even pleasure in this life. If not, consider the life of St. Augustine, and the power of grace, in helping to give up the concerns of the flesh, and finding true rest and peace in God alone.

Understanding the Seven Gifts Depicted in Stained Glass at St. Mary on the Hill...