“Unless you eat the flesh of the Son of Man and drink His blood, you have no life within you” (John 6: 53). 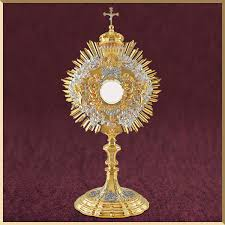 I received a text a few weeks back from a nephew who was struggling with his faith in God, wondering if was more up to him than God, to make his way in life.  He suggested that if he performed good works, good would be returned to him, and the same if he wronged another. He didn’t need to be saved by Christ, he seemed to boast, conflating Christianity with what he detested about organized religion. My response was an invitation to find what worked best for him, and if he thought he could go it alone without a “higher power”, to let me know later how that worked for him.  I offered my personal experience, seeing the hand of God in various aspects of my life, including the infusion of divine grace making a way for me to follow to Christ.  That seemed to help.

When I heard about a recent Pew Research poll, that most Catholics did not believe in the Holy Eucharist as the real presence of Jesus as His body, blood, soul and divinity, I was not surprised. My first reaction was to question the reliability of the poll, then I reflected on my nephew, raised a Catholic, who questioned the reality and presence of God in his own life, and I expected that his skepticism would extend to the Eucharist. I’ve heard various other Catholics who attended Anglican Holy Communion services, who told me the experience was being pretty much the same as a Catholic Mass.  Although well intentioned, they failed to realize the differences in understanding the Eucharist, specifically the consecration whereby Catholics traditionally believed that they received the body and blood of Christ under the form of bread and wine, which is not a universally held belief or doctrine in Anglicanism.

As a Catholic raised and catechized in church teachings, core principles were drilled into me at a young age.  I understood very early about what I would describe as a code of behavior I was expected to follow or face certain consequences in the hereafter.  It would be later in life when I began to understand the love and mercy of Jesus, and that all were called to experience the joy of redemption from sin, knowing that the reality of heaven was within the grasp of all believers. That said, I never lost my grounding in knowing right from wrong, with no excuses or rationalization.

What’s missing today is a solid and reliable formation of youth and adults in the Christian faith.  Since the 1960’s, so much has been done to make a walk with Jesus a “cool” thing, making liturgical traditions more compatible with the contemporary.  Of course, we continue to be told not to judge, which has been used to excuse immorality, branding those who object to a popular and pervasive version of moral truth as bigots or “haters”.

Back to the Eucharist, it is also clear that too many Catholics have never experienced the transcendent, mystical nature of their faith, as can be found through the liturgy of the Mass and the sacraments, especially the Eucharist, which is spiritual food for the journey.  By transcendent, I am talking about finding the majesty of Christ at a deeper level, which can transform us, taking us to a place where our lives are increasingly conformed to His will and purpose, and unlocking limitless potential through the infinite move of Jesus. Yes, a greater measure of peace and joy will likely follow.  That’s heavy, but real!

In a world that is desperate to find any sustainable peace and joy, advocating Christianity as an opportunity to change their lives for the better, may be the “hot ticket” after all.  It really takes a personal transformation to take us beyond the self-imposed limits of our human understanding, to open our lives to the full potential of possibilities.

If you have experienced this profound change in your life, share this with a friend or family member, and offer some hope in Jesus!

“I can do all things through Christ who strengthens me” (Philippians 4:13).